It would be really cool to be able to communicate with an Arduino microcontroller board from a Windows 10 UWP application. Basically this can be done in several ways:

The most simple one seems to be the USB cable based serial communication. Microsoft provides a sample project to demonstrate such connection in the Windows universal samples GitHub repository.

The hardware requirements of this example are the followings:

The example should find the Arduino board, which is connected to the Windows 10 device. After a successful connection the User could blink the 4 LEDs and retrieve the current temperature in celsius from the attached sensor.

Personally I thought that this example will work out of the box, because the Arduino board was programmed throught the same USB serial connection, which gets used by this example. When I assembled the circuit and uploaded the given sketch to my Arduino board, nothing happened.

I tried the example with an Arduino Nano clone. First I thought that this is the case. The board could be incompatible with this example. Microsoft seems to favor the original Arduino Uno board. I guess they tested the example with it. I had an Arduino Mega 2560, but no geniue Arduino Uno. I decided to buy one! I also didn’t want to wait until it arrives, instead I started to investigate what the problem can be. 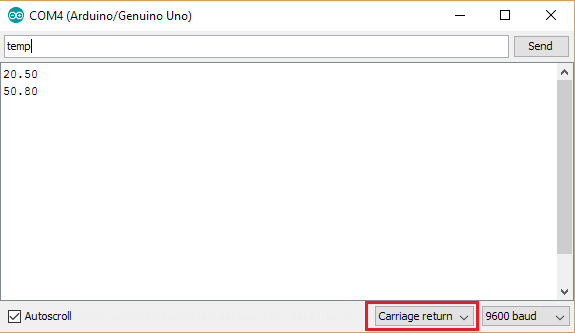 Once I did that I was able to blink the 4 LEDs. All you have to do is to type the followings and hit Send:

It proves that the Arduino sketch works now and the problem is with the SerialArduino UWP example. I scanned through the available documentation and found out in the Windows.Devices.SerialCommunication namespace description, that the application package manifest file has to contain the right Vid and Pid numbers. Fortunately the Get Board info menu item in the Arduino IDE reveals the correct numbers: 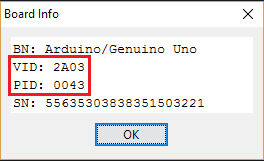 I fixed that in the example, so now my Arduino board was discovered by the sample and I was able to connect to it.

Oddly enough at this time I was able to blink the LEDs in the UWP sample application and the temperature information came back nicely. When I disconnected my Arduino board and reconnected again I had the same experience. The board was discovered, but the example didn’t work. I figured out that the followings can make it work:

Basically I used the Serial Monitor in Arduino IDE to setup a serial connection with the right parameters. I could have stopped at this point, but I wanted to make the example work without this Serial Monitor hack.

As I mentioned previously instead of the LM35 temperature sensor, I used a DHT22 sensor from Keyes Studio. The updated circuit diagram looks like this: 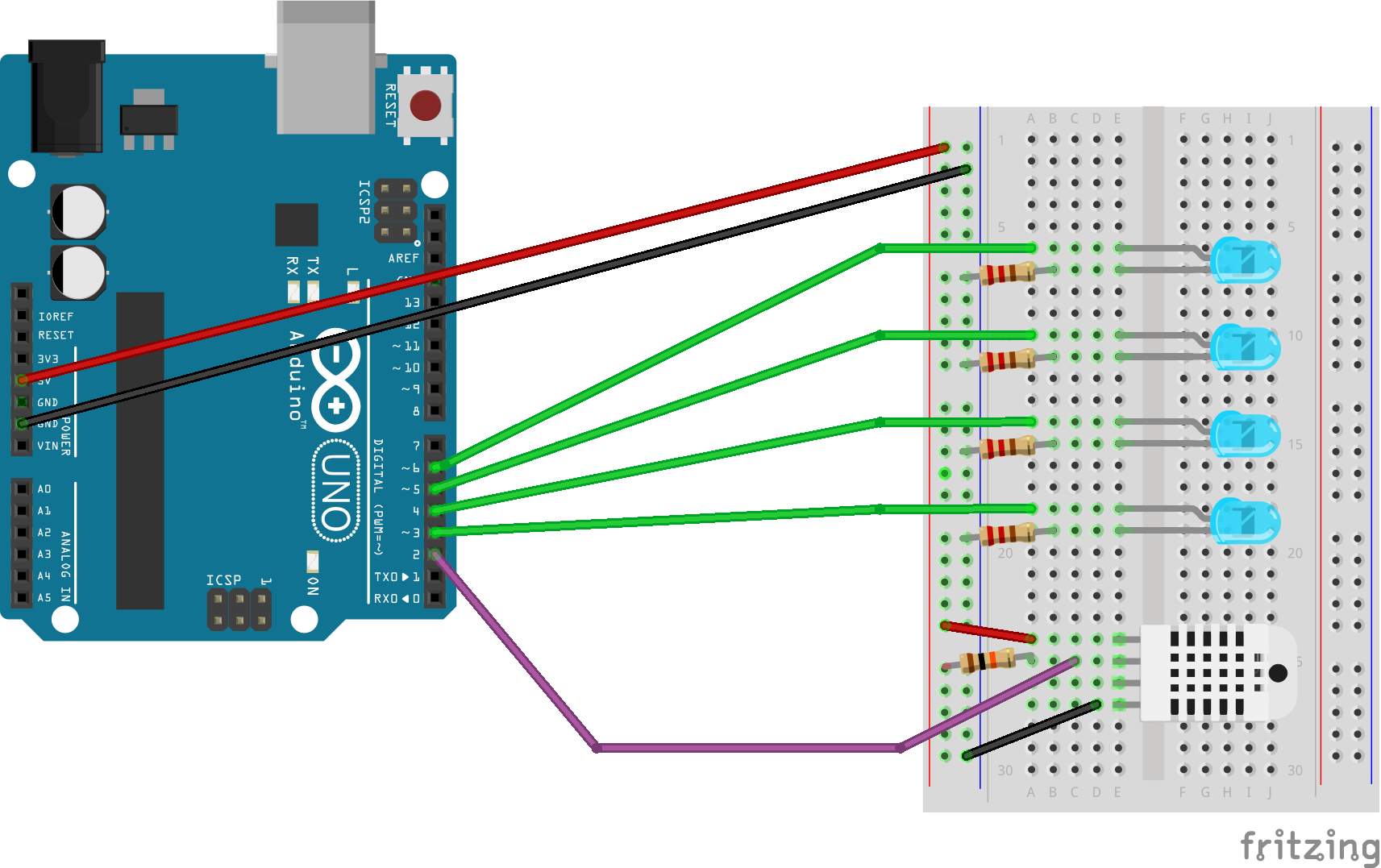 In short I had to get rid of all code, which belongs to the LM35 temperature sensor. I used the Adafruit DHT sensor library in order to retrieve the temperature and humidity information:

Finally a new command - hum - was registered in order to be able to request the humidity value:

The final Arduino sketch can be found on GitHub in my fork. It has to be uploaded to the Arduino microcontroller board before the SerialArduino UWP example gets used.

As I said before the right Vid and Pid numbers have to be declared in the App package manifest file:

The Vid and Pid based Device Id reference was commented out, because it can be any to allow access to any device that matches the function type. If the Vid and Pid based identification gets used then the right values have to be reflected in the Constants.cs file as well:

Now we are able to connect to the device, but there is a discrepancy about how the connection was initialised in the Arduino IDE based Serial Monitor and in the example code. This is the reason why the sample works after some testing in the Serial Monitor.

In order to make the sample code work without the Serial Monitor the following device details have to be specified in the OnNavigatedTo method of the Scenario2_LEDTemp.cs class. The most important ones are the BaudRate, WriteTimeout and ReadTimeout properties:

The DHT22 sensor is able to provide the humidity information besides the current temperature. It makes sense to display it on the screen as well: 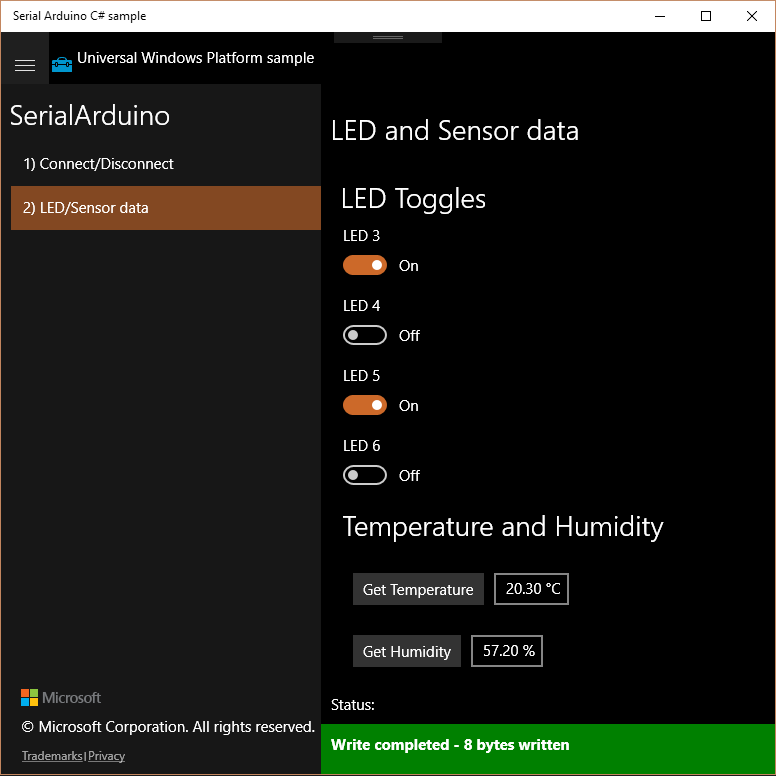 By default the device Instance Id gets displayed on the Device Selection page. It would be nice to display the name of the device instead of the id. This can be done with the following line in the Constants.cs file: 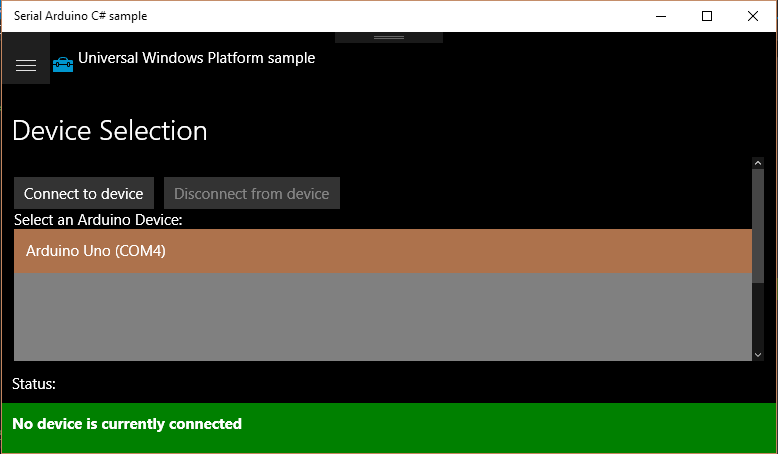 Fortunately the device name contains the communication port identifier as well, which is a nice value added feature.

The source code of the modified example can be found on GitHub in my fork on the fix-SerialArduino branch of the Universal Windows Platform (UWP) app samples repository.